What is the difference between a Biography and an Autobiography?

A biography is an account of a person's life, written by someone else.

An autobiography is an account of a person's life, written by that person.

This guide was designed to help you find both biographical and autobiographical information in many different formats through the CCBC libraries. Click on the tabs above to see books, databases, websites, and videos.

What is a Collective Biography or Autobiography?

A collective biography contains biographies about two or more people. It is often a large anthology, like Biographical Dictionary of Psychology, or Encyclopedia of Women's Autobiography. A biography or autobiography which covers the life of one person is an individual biography. 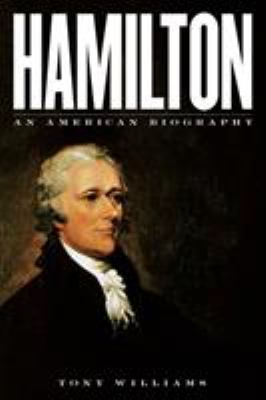 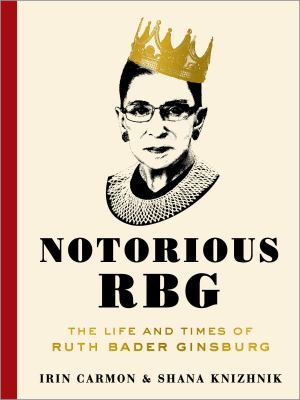 New York Times Bestseller Featured in the critically acclaimed documentary RBG "It was beyond my wildest imagination that I would one day become the 'Notorious RBG." -- Ruth Bader Ginsburg, 2019 She was a fierce dissenter with a serious collar game. A legendary, self-described "flaming feminist litigator" who made the world more equal. And an intergenerational icon affectionately known as the Notorious RBG. As the nation mourns the loss of Ruth Bader Ginsburg, discover the story of a remarkable woman and learn how to carry on her legacy. This runaway bestseller, brought to you by the attorney founder of the Notorious RBG Tumblr and an award-winning feminist journalist, is more than just a love letter. It draws on intimate access to Ginsburg's family members, close friends, colleagues, and clerks, as well as an interview with the Justice herself. An original hybrid of reported narrative, annotated dissents, rare archival photos and documents, and illustrations, the book tells a never-before-told story of an unusual and transformative woman who transcended divides and changed the world forever. 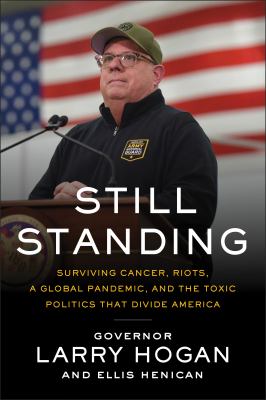 Still Standing reveals how an unlikely governor is sparking a whole new kind of politics--and introduces the exciting possibilities that lie ahead. As the rookie Republican governor of deep-blue Maryland, Larry Hogan had already beaten some daunting odds. A common-sense businessman with a down-to-earth style, he had won a long-shot election the Washington Post called "a stunning upset." He'd worked with cops and neighborhood leaders to quell Baltimore's worst rioting in 47 years. He'd stared down entrenched political bosses to save his state from fiscal catastrophe, winning praise from Democrats, Republicans and independents. But none of that prepared him for the life-threatening challenge he would have to face next: a highly aggressive form of late-stage cancer. Could America's most popular governor beat the odds again? The people of Maryland, with their "Hogan Strong" wristbands, were certainly pulling for him, sending him back to the governor's office in a landslide. As Governor Hogan began his second term cancer-free, his next challenge went far beyond Maryland: bringing our divided country together for a better future. And in 2020, as the COVID-19 pandemic changed that future forever, Hogan was once again called to rely upon his bold, open-minded approach to problem-solving to lead and serve in a time of unprecedented turmoil. In his own words and unique, plain-spoken style, Larry Hogan tells the feel-good story of a fresh American leader being touted as the "anti-Trump Republican." A lifelong uniter at a time of sharp divisions. A politician with practical solutions that take the best from all sides. An open-hearted man who has learned important lessons from his own struggles in life. As we face a future full of questions, Hogan offers some surprising answers. Still Standing is a timely reminder that perseverance in the face of unexpected obstacles is at the heart of the American spirit. 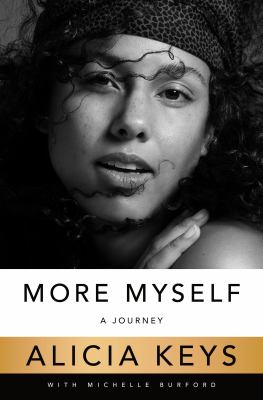 An intimate, revealing look at one artist's journey from self-censorship to full expression As one of the most celebrated musicians in the world, Alicia Keys has enraptured the globe with her heartfelt lyrics, extraordinary vocal range, and soul-stirring piano compositions. Yet away from the spotlight, Alicia has grappled with private heartache--over the challenging and complex relationship with her father, the people-pleasing nature that characterized her early career, the loss of privacy surrounding her romantic relationships, and the oppressive expectations of female perfection. Since Alicia rose to fame, her public persona has belied a deep personal truth: she has spent years not fully recognizing or honoring her own worth. After withholding parts of herself for so long, she is at last exploring the questions that live at the heart of her story: Who am I, really? And once I discover that truth, how can I become brave enough to embrace it? More Myself is part autobiography, part narrative documentary. Alicia's journey is revealed not only through her own candid recounting, but also through vivid recollections from those who have walked alongside her. The result is a 360-degree perspective on Alicia's path, from her girlhood in Hell's Kitchen and Harlem to the process of growth and self-discovery that we all must navigate. In More Myself, Alicia shares her quest for truth--about herself, her past, and her shift from sacrificing her spirit to celebrating her worth. With the raw honesty that epitomizes Alicia's artistry, More Myself is at once a riveting account and a clarion call to readers: to define themselves in a world that rarely encourages a true and unique identity. 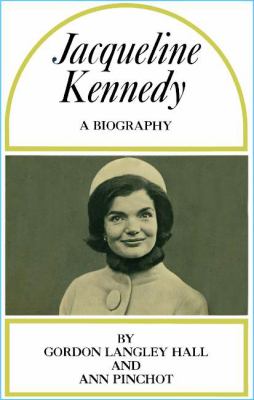 Every American whose heart went out in sympathy and admiration to a dauntless First Lady during the terrible, unforgettable days of November 1963 will want to read this intimate and touching biography of Jaqueline Kennedy. It revels as never before the stature of the person who has set a shining standard for American womanhood.---from the inside sleeve 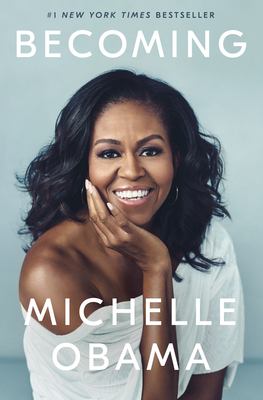 An intimate, powerful, and inspiring memoir by the former First Lady of the United States   #1 NEW YORK TIMES BESTSELLER * WATCH THE EMMY-NOMINATED NETFLIX ORIGINAL DOCUMENTARY * OPRAH'S BOOK CLUB PICK * NAACP IMAGE AWARD WINNER * ONE OF ESSENCE'S 50 MOST IMPACTFUL BLACK BOOKS OF THE PAST 50 YEARS In a life filled with meaning and accomplishment, Michelle Obama has emerged as one of the most iconic and compelling women of our era. As First Lady of the United States of America--the first African American to serve in that role--she helped create the most welcoming and inclusive White House in history, while also establishing herself as a powerful advocate for women and girls in the U.S. and around the world, dramatically changing the ways that families pursue healthier and more active lives, and standing with her husband as he led America through some of its most harrowing moments. Along the way, she showed us a few dance moves, crushed Carpool Karaoke, and raised two down-to-earth daughters under an unforgiving media glare.   In her memoir, a work of deep reflection and mesmerizing storytelling, Michelle Obama invites readers into her world, chronicling the experiences that have shaped her--from her childhood on the South Side of Chicago to her years as an executive balancing the demands of motherhood and work, to her time spent at the world's most famous address. With unerring honesty and lively wit, she describes her triumphs and her disappointments, both public and private, telling her full story as she has lived it--in her own words and on her own terms. Warm, wise, and revelatory, Becoming is the deeply personal reckoning of a woman of soul and substance who has steadily defied expectations--and whose story inspires us to do the same. 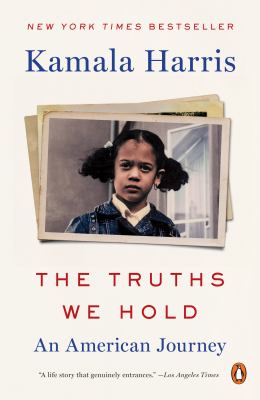 The Truths We Hold

A New York Times bestseller From Vice President-Elect Kamala Harris, one of America's most inspiring political leaders, a book about the core truths that unite us, and the long struggle to discern what those truths are and how best to act upon them, in her own life and across the life of our country Vice President-Elect Kamala Harris's commitment to speaking truth is informed by her upbringing. The daughter of immigrants, she was raised in an Oakland, California community that cared deeply about social justice; her parents--an esteemed economist from Jamaica and an admired cancer researcher from India--met as activists in the civil rights movement when they were graduate students at Berkeley. Growing up, Harris herself never hid her passion for justice, and when she became a prosecutor out of law school, a deputy district attorney, she quickly established herself as one of the most innovative change agents in American law enforcement. She progressed rapidly to become the elected District Attorney for San Francisco, and then the chief law enforcement officer of the state of California as a whole. Known for bringing a voice to the voiceless, she took on the big banks during the foreclosure crisis, winning a historic settlement for California's working families. Her hallmarks were applying a holistic, data-driven approach to many of California's thorniest issues, always eschewing stale "tough on crime" rhetoric as presenting a series of false choices. Neither "tough" nor "soft" but smart on crime became her mantra. Being smart means learning the truths that can make us better as a community, and supporting those truths with all our might. That has been the pole star that guided Harris to a transformational career as the top law enforcement official in California, and it is guiding her now as a transformational United States Senator, grappling with an array of complex issues that affect her state, our country, and the world, from health care and the new economy to immigration, national security, the opioid crisis, and accelerating inequality. By reckoning with the big challenges we face together, drawing on the hard-won wisdom and insight from her own career and the work of those who have most inspired her, Kamala Harris offers in THE TRUTHS WE HOLD a master class in problem solving, in crisis management, and leadership in challenging times. Through the arc of her own life, on into the great work of our day, she communicates a vision of shared struggle, shared purpose, and shared values. In a book rich in many home truths, not least is that a relatively small number of people work very hard to convince a great many of us that we have less in common than we actually do, but it falls to us to look past them and get on with the good work of living our common truth. When we do, our shared effort will continue to sustain us and this great nation, now and in the years to come.

In CCBC libraries, there is no specific section for Biographies and Autobiographies. The books are shelved with other books on the topic with which the person being written about is identified. For instance, a biography of Bill Gates will be found with books about the computer industry. A biography of Nelson Mandela will be classed with books about South African politics.